< Back to all blogs

To Grains or Not to Grains: That is the Question, Part II

What a response to my last article! Based on all the replies, it seems my article rang a bell with many of you and spoke to a concern you’ve been experiencing.

As a health care provider, my concern is no less, as people grant me their trust every day to advise them on what is best for their wellness.

So what’s the problem with grains? Or is there really even one? How can they be so bad if the Chinese were eating them for thousands of years, seemingly to their benefit?

In this article, I am attempting to bridge the gap between the arguments from modern evidence — which show us that grains are actually dangerous, and what Chinese medicine says — that a moderate amount of grains can actually build our Qi, and is good for many of us.

At this point, I’m pretty convinced that grains do have a damaging effect on our intestines. But after all my pondering, researching, and swaying towards both sides at one point or another, I’ve also come to believe that when eaten within a larger context of mitigating dietary and lifestyle factors, as was originally done in China, some people are – or at least were – indeed able to reap benefits without suffering from the (at least noticeable) deleterious effects.

Do I pretend to have the final say on this issue? Absolutely not. But we can only do the best we can with the information we have, and after critically thinking over as much information I could find, I am presenting here my conclusions.

If you did not read last week’s article, you can read it here, to catch yourself up. There are so many factors to consider that if I were to include them all in this article, it would turn into another 7 part article series. So I will only cover a few topics today, which include:

One of the biggest differences that us modern people are dealing with is the use of chemical medicines, both prescribed and Over the Counter (OTC). Antibiotics are handed out like candy whether people have a bacterial infection or not, and they are routinely used longterm for cosmetic issues like acne. “Harmless” OTC painkillers are probably in almost 100% of the medicine cabinets of people in industrialized countries.

We have such easy and prolific access to chemical pills these days that we think nothing about popping a few on a regular basis for headaches, allergies, rashes, soreness from exercise, etc. Steroid medications are being used more and more often to suppress the symptoms of inflammation.

The problem is, many times the symptoms we’re trying to treat are directly related to the very medicines we use to suppress them.

This is a problem! Specifically, the problem is that many of these medicines cause leaky gut. This taxes our immune system and causes it to work overtime, leaving us more prone to bacterial infections or a flare-up of latent viruses, so we’re prescribed antibiotics. Then, if our immune system gets really overactive, we’re prescribed steroids. These cause our gut to leak even more, leading to more medications and more leaking of the gut, and on and on and on.

In China, they did not have these medications, so people were not dealing with medically caused leaky gut. That means that their digestion had much stronger structural integrity than ours to begin with, which means they were likely handling grains with much less problem, and able to get the “good stuff” from them more easily, without the same risk of being taken over by the bad.

How do you compare?:

If you have not taken antibiotics for many years (and have made absolutely sure you have restored your healthy gut flora after you did take them), you don’t pop OTC pills on a regular basis, and you stay away from pharmaceutical medicines; I think you are much more likely to have less problems with grains, simply due to the lack of the combined effect of multiple factors damaging your digestion.

However, if you are a regular OTC pill popper and/or have taken the biggies recently (steroids and/or antibiotics), then by eating grains you’re likely throwing fuel into a fire that’s already burning. In that case, it is extremely likely that no amount of grains is going to be safe for you to eat, at least not until something happens to heal your intestines.

Anti-Nutrients and the depletion of minerals

In the interest of keeping this article a somewhat manageable size, I won’t go into all the details with the “anti-nutrients” in grains (and other foods, but we’ll stick with grains for now). I will keep it simple by saying that grains contain large amounts of these components , which molecularly bind with important minerals in our body, like zinc, iron, and calcium, and others.

Why this matters is that after you eat grains, you have a net decrease in these minerals (anyone hear anemia…? Osteoporosis…? Decreased immunity to viruses…?)

This is worsened because we tend to WAY overeat grains in our modern culture, crowding out nutrient rich veggies which contain huge amounts of minerals. When we eat nutrient rich foods, the minerals in those foods are enough to bind to the anti-nutrients and there are still some left over for our bodies to absorb.

But without those nutrients along with our grains, there are no other minerals but those in our body for the anti-nutrients to bind with, so they get leached from our body.

If you step back and look at how Asians traditionally ate, except in cases of famine there was typically a good portion of vegetable matter with most meals. Until modern day, there was no snacking on grain laden junk foods. That means the ratio of grains to vegetable matter was completely different than it is today.

I believe the reason people in traditional China found that grains would nourish and build the body is because they were eating them in much smaller portions, and proportions, in comparison to other vegetable and fruit matter; as well as in the context of other healthy foods that mitigated the damaging effects (which are too many to go into in this article).

Therefore, when eating grains, I believe people would in general end up with a net increase in nutrients, and their Qi would be tonified.

How do you compare?

So, if you eat some form of grain with most meals, in the absence of a large portion of veggies and fruits; and snack on anything grain based throughout the day, it is likely that grains are having more of a harmful affect on your body than beneficial.

Unless you’re eating about 3:1 ratio veggies to grains, you’re likely not getting enough to counteract this depleting effect.

Sorry…that little side of veggies once or twice per day won’t cut it.

Frankengrains: The difference between our modern grains and those of yesteryear

Not all grains are genetically altered at this point, but if we just look at wheat, it has about 4 times the amount of gluten (that’s 400%!) than it did just even 50 years ago. It has been bred to have more gluten because that’s what gives it its chewy, gooey, oh so yummy qualities.

Gluten is a major culprit in the “leaky gut” issue, so every time we eat that precious bagel or sandwich, we could be one step closer to inflaming a serious inflammatory condition. Pretty much all conventional corn these days is genetically modified, which just adds to the immune system attacking issue (because the body can recognize GMO foods as foreign), especially because corn is in EVERYTHING. 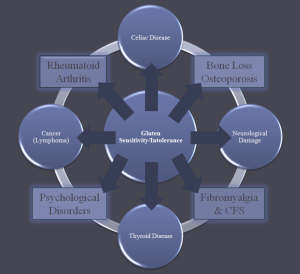 Connection between gluten and various diseases

Local chef Linda Hoffman, in an article written for the Coloradoan, states “Dr. William Davis, a practicing cardiologist focused on prevention and author of Wheat Belly: Lose the Wheat, Lose the Weight, and Find Your Path Back to Health, tells us that cross-breeding of wheat has changed the grain so dramatically that it is no longer a food that is healthy for us.”

Unfortunately, the wheat that Chinese medicine says will help build our Qi is NOT the wheat that was experimented with on millions of patients for thousands of years. This means that I’ve come to terms with the fact that I can no longer base my prescriptions for patients solely on what the ancient remedies prescribe.
Because of this reality of the unavailability of traditional wheat, I’ve pretty much come to the unfortunate conclusion that wheat is probably not going to be very beneficial for any of us anymore. (I almost cry as I say this…I LOVE my home-made breads!). :-( But gluten is just too damaging for the digestive tract. And this leads to my last point.

What’s the next step to figure out what grains are doing to you?

If you can’t already tell, based on the above info, if grains are likely to be a problem for you, then the next step could be testing. More and more, my patients and I are deciding together to run tests through specialized labs (not the kind your regular MD would order…those are not specific or precise enough) to find out if specific foods are causing problems.

You can find out about how your body reacts to gluten, as well as potential allergies, sensitivities, and specifically leaky gut, through simple blood and/or stool tests.

Whether people opt for testing or assume they have a problem and move immediately to the next step, there are also pharmaceutical grade supplements that have been formulated specifically to heal up a damaged and leaky gut.

Including those with treatment also helps push people through the plateau, while at the same time decreasing the amounts of foods to which they are sensitive.

Overall conclusion: To Grains or Not to Grains — were the Chinese right?

My first and true love is Chinese medicine. That will always be the primary angle of treatment I will choose to use, because I see “miracles” happen in the treatment room every day.  I love how it treats each person individually, even taking into account the different ways food sensitivities play out as different imbalances within each person.

But while it is still my first course treatment for all symptoms, it is also true that I’m seeing patients who have experienced improvement followed after some time by a plateau, reach new levels of health and wellness after finding out the specific foods that were damaging their systems, and avoiding them.

If we combine the digestive-healing effects of acupuncture and herbs with avoidance of foods which could be damaging the digestion, we will achieve greater and longer term results.

So to grains or not to grains…what is the answer for you?